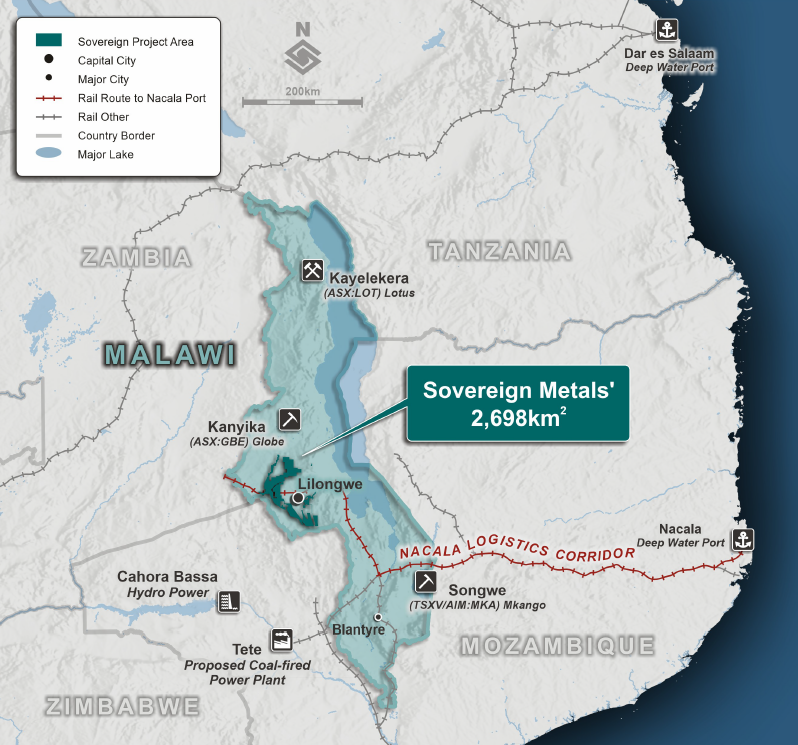 Sovereign controls one of the largest rutile deposits in the world. This globally significant, strategic rutile discovery made across its large Malawi ground holding.

The Company’s objective is to develop a large-scale, long life rutile operation, focusing on developing an environmentally responsible, sustainable and socially uplifting operation. 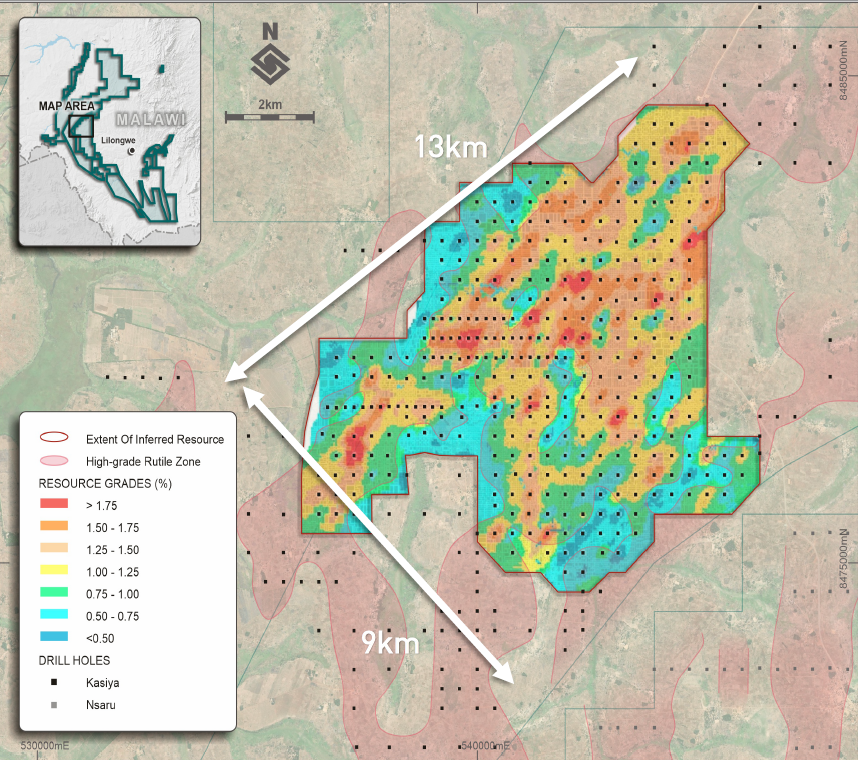 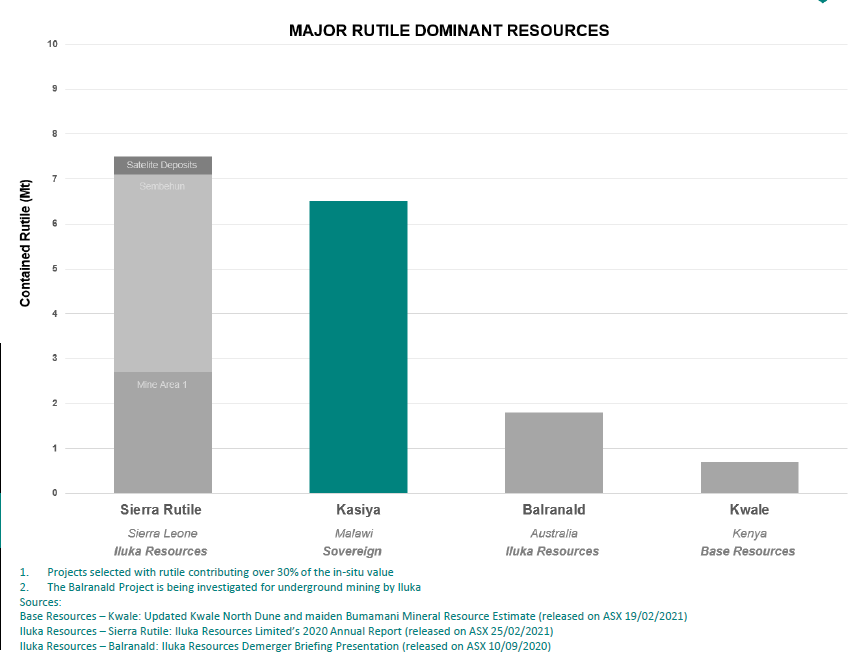 Natural rutile is traditionally a by-product or co-product from mineral sands mining where ilmenite is commonly the dominant mineral in the assemblage, alongside lesser natural rutile and zircon. Natural rutile is considered to be a genuinely scarce commodity, with no other known large rutile dominant deposits being discovered in the last half century.

Comparing Kasiya to the other major rutile-dominant resources, it sits within the top two alongside Sierra Rutile. Further near-future resource growth could see Kasiya potentially become the largest and pre-eminent rutile deposit globally, with central Malawi potentially becoming the largest rutile province in the world.

Current sources of natural rutile are in decline as several operations’ reserves are depleting concurrently with declining ore grades. These include Iluka Resources’ (Iluka) Sierra Rutile and Base Resources’ Kwale operations in Kenya. Recent announcements by Iluka advising of the potential suspension of operations at Sierra Rutile may cause significant additional product to be removed from the market in the near to medium term. Additionally, there are limited new deposits forecast to come online, and hence supplies of natural rutile are likely to remain in structural deficit. 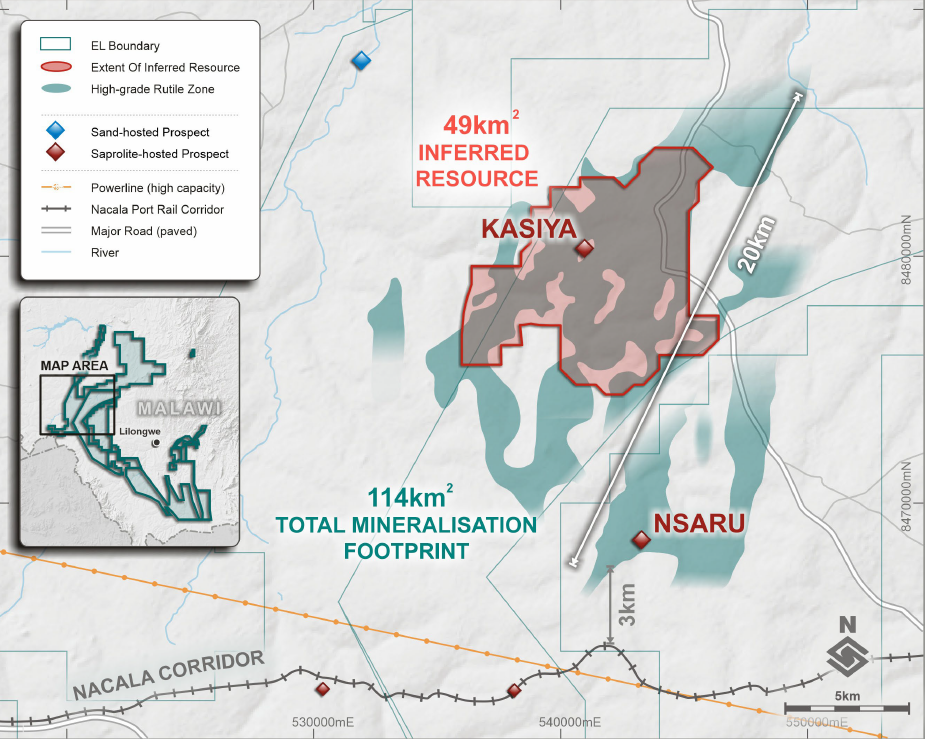 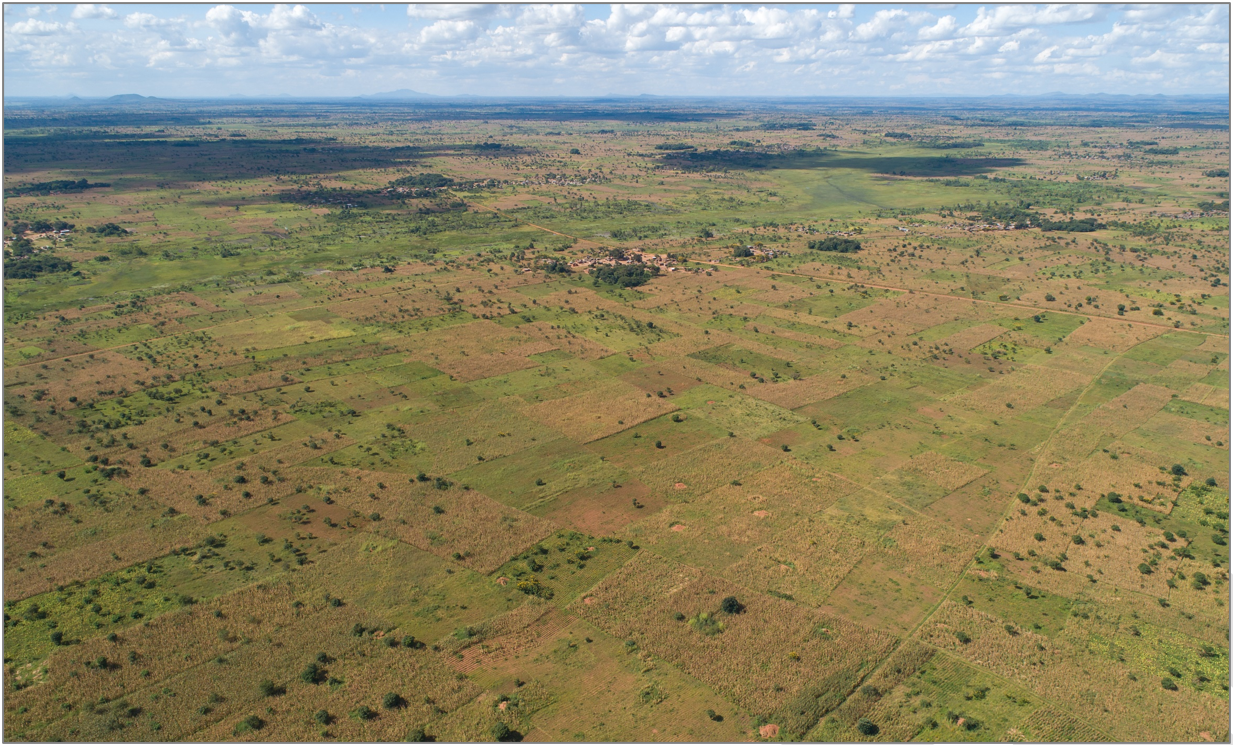 The Company now has a total of ~114km2 of drilled, high-grade rutile mineralisation (Kasiya 89km2 + Nsaru 25km2). The area covered by the Kasiya MRE is just 49km2 or 43% of the 114km2 drilled mineralised footprint. The opportunity to significantly expand on the maiden MRE in the near to medium term is therefore substantial.

The peripheral zones at Kasiya with nominal 800m x 800m drill spacing will be infilled to allow this material to be included in a future MRE. The Nsaru deposit also requires further infill and extensional drilling before it can be brought in to the MRE. 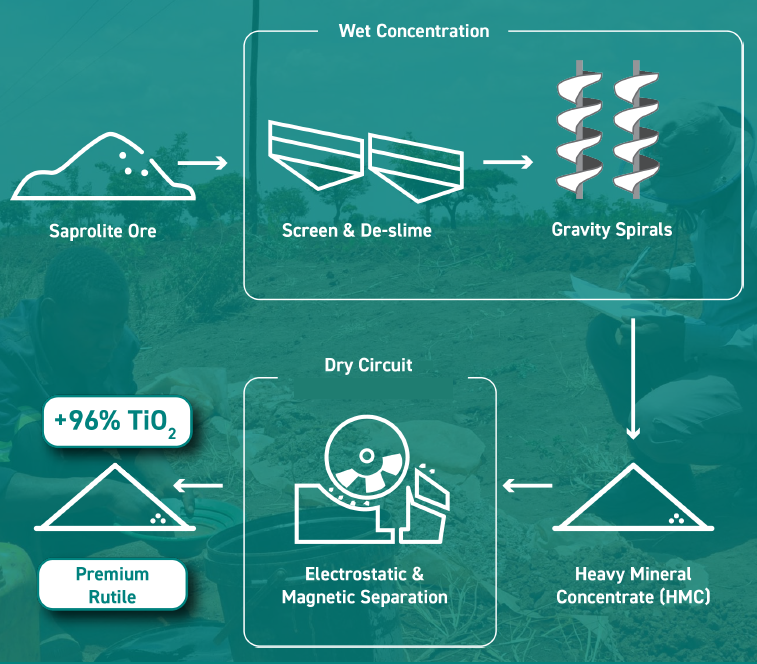 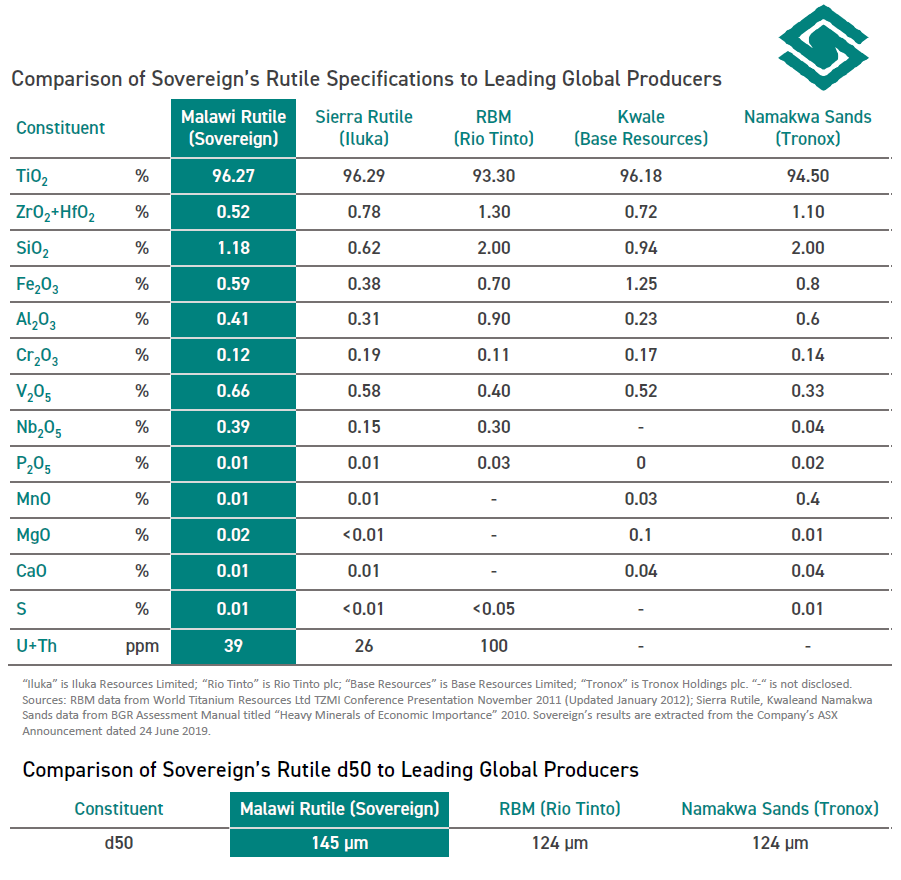 Metallurgical test-work with over 1 tonne of saprolite material demonstrated that very high-quality rutile meeting or exceeding typical market specifications can be produced.

The lack of supply of natural rutile, due to its genuine scarcity, prompted the titanium industry to develop energy and carbon intensive processes to upgrade ilmenite (low-grade titanium mineral) to high-grade titanium feedstock products that can be used as substitutes for natural rutile (i.e. synthetic rutile and titania slag).

Natural rutile requires no upgrading for direct use as titanium pigment feedstock, eliminating the upgrading step required for ilmenite, resulting in zero additional CO2 emissions. Up to 2.8 tonnes CO2 eq. for each tonne of natural rutile utilised could be saved compared to the upgrading/beneficiation of ilmenite, via smelting and chemical processes, to high-grade titanium feedstocks like titania slag and synthetic rutile.
The downstream processes (i.e. pigment production) rely heavily on the use of upgraded titanium feedstocks such as synthetic rutile and titania slag, each having an associated substantial environmental impact.

Due to growing environmental pressures, and with the significant carbon footprints of numerous industry players related to pyrometallurgical ilmenite upgrading operations, Sovereign’s natural rutile product is well positioned to impact the titanium supply chain with the ability to potentially displace and reduce the use of carbon and waste-intensive upgraded alternative titanium feedstocks. 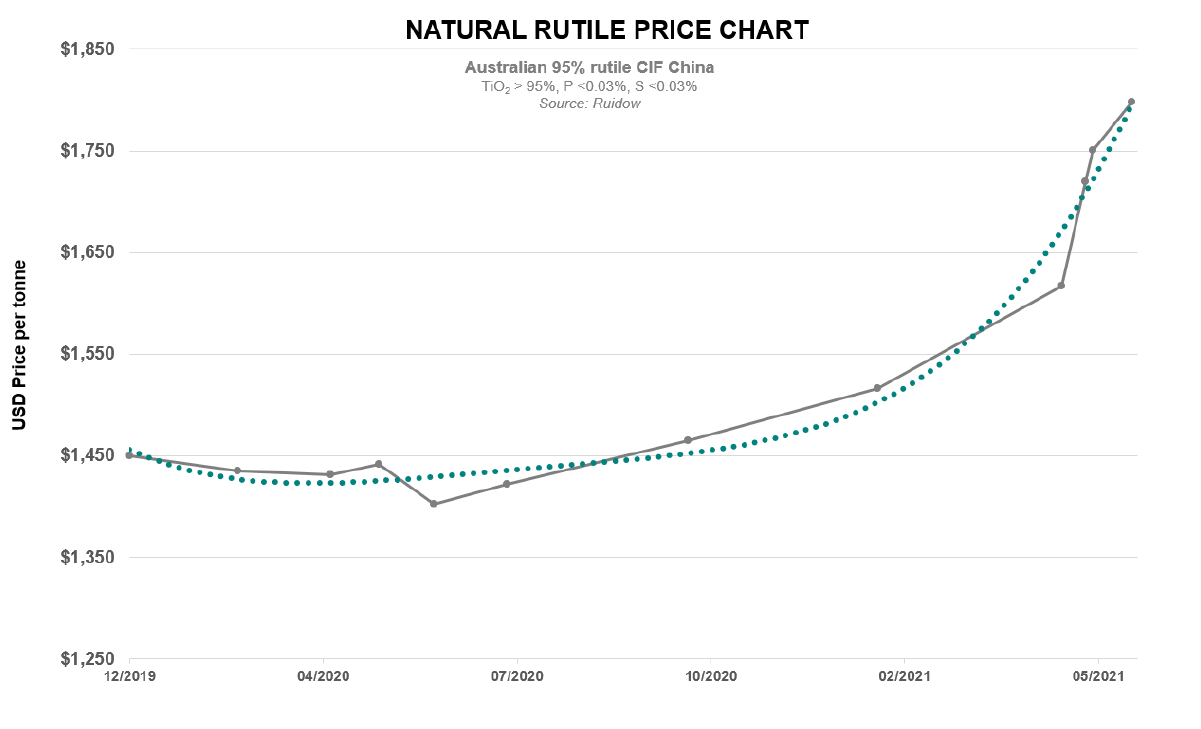 Natural rutile is the purest, highest-grade natural form of titanium dioxide (TiO2) and is the preferred feedstock in manufacturing titanium pigment and producing titanium metal. Titanium pigments are used in paints, coatings and plastics. Titanium also has specialty uses including in welding, aerospace and military applications.

The rutile market fundamentals continue to be robust with current and forecast pricing remaining very strong. In 2021, the market has rebounded strongly with pigment plant utilisation rates returning to pre-pandemic levels. Major producers have noted that very strong demand in the welding market is outstripping supply.

High-grade titanium feedstock supply is tight with limited new projects coming online in the short to medium term. Iluka has recently announced the potential suspension of its Sierra Rutile operations. Sierra Rutile is the largest global producer of natural rutile, currently contributing over 20% of the total natural rutile market with production of about 150ktpa.

A resurgence in demand for titanium pigment and from the welding sector combined with concurrent supply shortages has led the CIF China spot prices sharply upwards toward US$1,800 per tonne (Figure 6). In the quarter ended 31 March 2021, Iluka achieved rutile prices of US$1,199 per tonne with the majority of Iluka’s sales under take-or-pay contracts.